A joint ceremony of mourning for Israelis and Palestinians is controversial, but can also open a window of hope for a better shared future. ICCJ’s former President Debbie Weissman was there.

The day before Israel Independence Day is called Yom HaZikkaron, the national day of remembrance and mourning for the fallen soldiers. In the last few years, victims of terror have been included in the list of those who are mourned. Ceremonies are held throughout the country, and sirens are blown at 8 p.m. and the next morning at 11. As on Holocaust Memorial Day, the entire country stops to stand at attention and honor the memory of the fallen.

This year (Tuesday, May 7, 2019), I participated in an alternative and even somewhat controversial ceremony in the evening. It was a joint memorial for Israeli and Palestinian victims of violence and of the ongoing conflict between the two peoples. This ceremony has been held for the past 14 years, but this is the first year in which I have attended. It was held at a huge park in Tel-Aviv, meticulously organized, attended by thousands of Israelis and Palestinians, and protested by a few hundred extremists.

The event is organized each year by the Bereaved Families’ Forum, an organization founded in 1995, involving people on both sides of the conflict, who have lost a loved one, but whose response is not to seek revenge; rather to seek reconciliation and peace through dialogue and cooperation. The ceremony of an hour and a half or so, includes short, powerful speeches in Hebrew and Arabic and appropriate musical interludes. Everything is shown on huge screens (and livestreamed on social media) with translations into the parallel language and English, as well. The speakers are generally people who have lost a family member or close friend, in some aspect of the conflict.
The political establishments on both sides do not support this kind of joint memorial. Arguing that the ceremony conflates Israeli soldiers with Palestinian terrorists, the Israeli Defense Minister (who is also the Prime Minister) denied entry permits to 181 Palestinians from the West Bank, arguing it is dangerous to allow them in. Later, the Israeli Supreme Court overturned that decision. The Prime Minister’s son called anyone who would participate in such an event “mentally disturbed.” But the turn-out was impressive. Still, not all of the speakers could arrive and two of them spoke by means of short videos, filmed in their homes in Ramallah and Tulkarem.

I mentioned earlier that there were Israeli demonstrators, protesting the event. That is surely their legal right in a democracy. For them, any attempt to empathize with the other side is traitorous. Some even called us “Nazis.” Their style was vulgar and offensive, but that’s not a criminal act. Last year, some of them became violent and threw stones and other objects at the bereaved families. The security forces learned from that experience and made sure that the demonstrators and the mourners were kept apart. This year, as well, some turned violent and five were arrested. 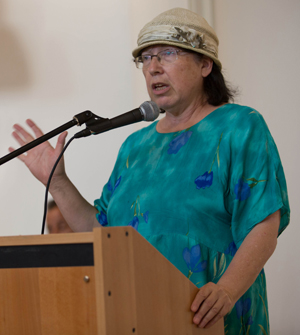 Which brings me to why I’m telling this story and what it has to do with inter-religious dialogue. I went to the event, for the first time in my life, because my dear friend Leah Shakdiel from the Negev town of Yerucham was invited to be the main speaker. I have known Leah for more than 45 years. She is an Orthodox feminist who achieved national prominence in 1986, when she was denied membership on the local religious council of her town, based solely on her gender, and decided to fight her way up to the Supreme Court. (She eventually won the case.) Over the years, she has been an educator, a human rights activist, and a tireless worker for peace, and is now completing her studies for Orthodox rabbinic ordination. She is also one of the most intelligent and articulate speakers I know.

Leah and I drove together from Jerusalem to Tel-Aviv. Also in the car was a young woman, a recent immigrant to Israel, who is studying in the same co-ed rabbinical program as is Leah. The two women in the front of the car (I was sitting in the back) are visibly religious, modestly dressed, with their hair covered in the typical Orthodox fashion. Someone who didn’t know them might have mistaken them for settlers.
When we arrived at the park, several of the security people didn’t want to let us in. Leah’s name was on the list of VIP’s, as was the license number of her car. But the police, doing an understandable act of “profiling,” were worried that we were going to try to disrupt the ceremony rather than contribute to it positively. It took about twenty minutes and a call to one of the organizers to come out and explain, before they would let us in. At the ceremony, I was sitting next to a peace activist who is a member of an Orthodox Kibbutz on the Gaza border. He was describing the rockets fired earlier in the week from Gaza that forced the members of the Kibbutz to take shelter. I recognized several Reform rabbis in the audience, and a handful of Masorti (Traditional) Jews. But the overwhelming majority of the audience were secular and, mainly, Ashkenazim. Leah’s talk was brilliant. In less than ten minutes, I would say that she succeeded in breaking stereotypes and changing paradigms. She was the first speaker that evening to include the greeting “Ramadan Kareem.”

I have shared this story with you for several reasons. One is to indicate the enormous complexity of our lives in this region. But another is to underscore the positive role I believe religion and religious people can play in moving us beyond the conflict. Religious Jews and Muslims (and, sometimes, Christians, as well) can often find a common spiritual language. Peace-making is what diplomats and politicians are supposed to do; peace-building involves the grass-roots level, people-to-people. A way forward between Israelis and Palestinians will necessitate empathy and listening to the stories on both sides, which may be stories of great pain. But the chief message I came away with from the ceremony was a message of hope.