Built in the 19th century and located at Heppenheim (Germany), it was the Buber-Family home from 1916 to 1938. Here Martin Buber wrote his famous „I and Thou“ and started his translation of the Hebrew Bible with Franz Rosenzweig.

Today the house is headquarters of the ICCJ and features a lecture series as well as visits to the house by guests, scholars and students from the region and all over the world.

The History of the Martin-Buber-House

The middle-class house on the corner of Werlestrasse/Graben in Heppenheim was built at the end of the 19th century. Moving to Heppenheim from a rental apartment in Berlin-Zehlendorf, the Buber Family was looking for more peace and quiet in the South-Western part of Germany. Martin Buber had been spending some time for convalescence in the Odenwald at Lindenfels and grown to love the Bergstraße with its pleasant climate. In 1916, in the middle of WWI, the 38-year-old philosopher and editor, and his family moved into the two-story building. Martin, Paula and their two children Rafael and Eva, enjoyed the large garden surrounding it. Initially tenants, the family was able to purchase the house four years later.

Paula and Martin Buber's study and drawing room were situated on the ground floor alongside the kitchen, dinning-room and morning-room (Teezimmer). Upstairs were the bedrooms, the children's rooms (later Rafael's daughters Barbara and Judith lived there) and the housekeeper's room as well as a small reading chamber ("Bücherkammer"), in which part of Buber's extensive library was housed. In Heppenheim Martin Buber worked on 'I and Thou 'and the first part of his translation of the Hebrew Bible, which was a collaboration with Franz Rosenzweig. The garden was home to vegetables, many different flowers and exotic plants and later the granddaughters' pet dwarf hens. From 1922 onwards, Buber regularly commuted between Heppenheim and Frankfurt, where he taught at Franz Rosenzweig's Free Jewish School (Freies Jüdisches Lehrhaus). From 1923 to 1930 he lectured Jewish Religion and Ethics at the University of Frankfurt and from 1930 to 1933 Buber received an honorary professorship for general religious studies. Owing to the intensified persecution of Jews through the NS-authorities, the family was forced to emigrate to Palestine in March of 1938. Since Martin Buber was not able to pay the "Reichsfluchtsteuer "– a tax on Jewish property and assets collected from  Jews who were to leave Germany permanently – he struck a deal with the NS-authorities, promising to spend at least five months a year in Heppenheim. Parts of the household, such as furniture and many of his books, had to be neglected and were destroyed on the night of 9th November 1938 in a state-sponsored pogrom ("Reichskristallnacht"). As Buber was now unable to return to Germany, the authorities demanded that he should pay for the damage caused by this vandalism and the Reichsfluchtsteuer. Since he could not afford such a large sum (approx. 27.000 Reichsmark), the house was ultimately seized by the tax authorities and sold off to the district council (Kreis Bergstraße). From the beginning of the Second World War, the former family home became an office space. 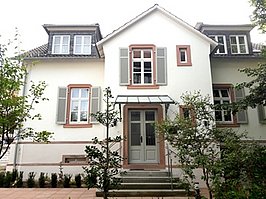 In the 1970s, the house was due for demolition in order to make space for a new building for the regional district council. Following the intervention of two committed Heppenheim residents, its significance for German and Jewish intellectual history of the 20th century was acknowledged, and the house was saved. On the condition that it should serve the cause of preserving and passing on Martin Buber's philosophical legacy, the house was declared a listed building by the government of the federal state of Hesse in 1976. After its renovation, a tenant was wanted to represent the spirit of Buber's ideas about dialogue.

The International Council of Christians and Jews, which up until then had its headquarters in London, was presented with the offer and subsequently decided to move into Martin Buber's former home in Heppenheim in 1979.

Since then, the Martin-Buber-House has become a mainstay for interreligious dialogue amongst regional and international audiences. It serves as a place of encounter and exchange by opening its doors to academics, students and all those interested in fostering mutual understanding. From the organisation of international conferences, the hosting of seminars and the curation of a small archive to the offering of guided tours, the house facilitates knowledge-sharing and keeps the memory of Martin Buber.