Report on the Award Ceremony
by Dr Matthew Tapie, Director of the Center for Catholic-Jewish Studies at Saint Leo University in Florida/USA 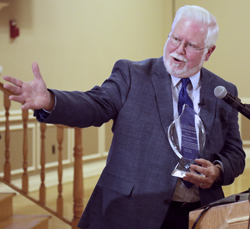 Prof. Cunningham is Professor of Theology and Director of the Institute for Jewish-Catholic Relations at Saint Joseph’s University in Philadelphia, PA. He earned his BA in History and MsEd from Fordham, his MA in religious education from LaSalle University, and his PhD in Religion and Education from Boston College. He is most recently the author of Seeking Shalom: The Journey to Right Relationship between Catholics and Jews (Eerdmans, 2015), and the co-editor of Christ Jesus and the Jewish People Today: New Explorations of Theological Interrelationships (Eerdmans, 2011) and The Catholic Church and the Jewish People: Recent Reflections from Rome (Fordham University Press, 2007).

Dr. Cunningham facilitated a Catholic-Jewish dialogue for over one hundred people in the Tampa Bay community, which included numerous priests and rabbis, Saint Leo University faculty, staff, and students; as well as lay leaders from the Diocese of St. Petersburg, and several synagogues. The event took place at Higgins Hall, at St. Lawrence Catholic Church, Tampa, and opened with a welcome by Bishop Gregory Parkes. Participants shared a meal as they were guided by Dr. Cunningham in small group discussions on a recent Vatican and a recent Orthodox Jewish statement.

The evening concluded with the Eternal Light Award, which has been presented nearly annually since 1999 to an individual who has made significant contributions to Catholic-Jewish relations. Previous recipients include Professor Jan Karski (1914-2000); The Rev. John Pawlikowski; Rabbi Irving Greenberg; His Eminence William Cardinal Keeler (1931-2017); Professor Mary C. Boys; and Rabbi Abraham Skorka, among others.
The dialogue portion of the event was co-sponsored by the Diocese of St. Petersburg, Congregation Schaarai Zedek, Tampa, Congregation Rodeph Sholom, Tampa, and the dinner was made possible by a generous gift from the Cohn and Whiting families in honor of the late Mort Siegler, a former advisory board member of the CCJS, and strong advocate of Catholic-Jewish relations in Florida.

Dr. Jeffrey Senese, the 10th president of Saint Leo University, Rabbi A. James Rudin, Senior Interreligious Advisor of the American Jewish Committee, along with Assistant Professor of Theology, and director of the CCJS, Dr. Matthew Tapie, presented the award to Cunningham.

In his remarks about Dr. Cunningham, Rabbi Rudin had this to say:

“Philip Cunningham, my longtime friend and cherished colleague was too young to be among those who participated in and shaped the now historic Nostra Aetate declaration of 1965, the product of the Second Vatican Council. But Phil did something as important as those Catholics and Jews who broke the hidden and not so hidden barriers between our two faith communities. Phillip Cunningham caught both the spirit, and developed the scholarship that guaranteed that the achievements of 50-plus years ago would not be frozen in time, frozen in an historic time warp, but never made active and real in the lives of Catholics and Jews. Tonight we add one more person to that illustrious group of those who have been recipients of our CCJS Eternal Light Award: Dr. Philip Cunningham of St. Joseph’s University in Philadelphia.
Philip Cunningham’s lifetime achievements made certain that Nostra Aetate and all that sprang from that tightly-worded declaration of the world’s Catholic bishops back in October 1965 would not be empty rhetoric. Philip Cunningham, a graduate of Fordham and LaSalle colleges, and awarded a doctorate at Boston College, has become one of the world’s leading scholars on the complex but vital field of interreligious relations.
And it is in that spirit of optimism and excitement that we are so pleased to honor one of the global leaders in our shared effort. Cunningham is a superior classroom teacher, and has influenced thousands of students. But he is more than a remarkable classroom professor. Phil has been an active leader in the international arena; serving as president of the International Council of Christians and Jews. Bringing Christians and Jews together from all parts of the world, and developing a strong association of centers of Christian-Jewish relations not only in North America where it is easier, but also in Europe, the Middle East and indeed throughout the world. But there is more, much more. Countless books, papers, articles, speeches have come from the brow, the word processor of Philip, enriching all of us. His CV stretches for pages as he has continually explored, argued, debated, created, shaped, and strengthened the deepening relationship between our two communities. Catholic-Jewish relations in particular, is now--thanks to Philip Cunningham’s extraordinary gifts and talents--those relations are now open not merely to the ivory tower elites, but to the entire world. And that in itself, would be reason enough to present him with the Eternal Light Award.”

Earlier in the day, Dr. Cunningham delivered an afternoon lecture to a packed hall of students and faculty entitled, “Moving Toward Mutuality? Challenges in Catholic-Jewish Relations.” During his visit, Dr. Cunningham was interviewed by Saint Leo University theology professor, Dr. Stephen Okey, for the website, Daily Theology. In the interview, Cunningham speaks about his early research into how Christian religious education material represented and misrepresented Judaism, on rethinking the Good Friday liturgy in light of anti-Semitism, and how Jewish-Christian dialogue might enable one to think more deeply about Christology (a podcast of the interview can be found here).