Former ICCJ President Debbie Weissman recently travelled to Cambodia, to attend a conference to which she had been invited by the World Council of Churches. She reports on interfaith - and intra-faith - dialogue in a truly international setting, stating that this particular conference was one of the most memorable ones she has ever attended.

I had a wonderful opportunity recently to be in Cambodia. I would like to divide my report to you into two parts, which correspond to the inter-religious consultation in Siem Reap, to which I was invited by the World Council of Churches, from Monday, Aug. 27th, until Friday, Aug. 31st, and then the weekend I spent in the capital city, Phnom Penh, before returning home to Jerusalem on Sunday, Sept. 2, to prepare for the Jewish festivals.

The World Council of Churches, together with its co-sponsor, the Council for World Mission, brought together 6 Christians, 3 Buddhists, 2 Hindus, 2 Muslims, and one Jew (me) for a consultation on inter-religious Dialogue and Liberation Theology. Don’t let the title “world mission” scare you; they are not trying to proselytize. They respect the other religions and their adherents and are trying to find ways of working together, mainly to fight poverty. Liberation theology is a movement that began largely within the Latin American context of the early 1970’s, but has affected other religious traditions, as well. In liberation theology, what is emphasized is God’s listening to the poor and the marginalized and for religious people to emulate that behavior and to respond in active ways. There is much talk of “the preferential option for the poor.”
People flew in to this meeting from Singapore, Lebanon, Bangladesh, Thailand, South Korea, India, New Zealand, as well as Western Europe and the US. I have been to many inter-religious gatherings over the last thirty years, but this one was definitely one of the most exciting. 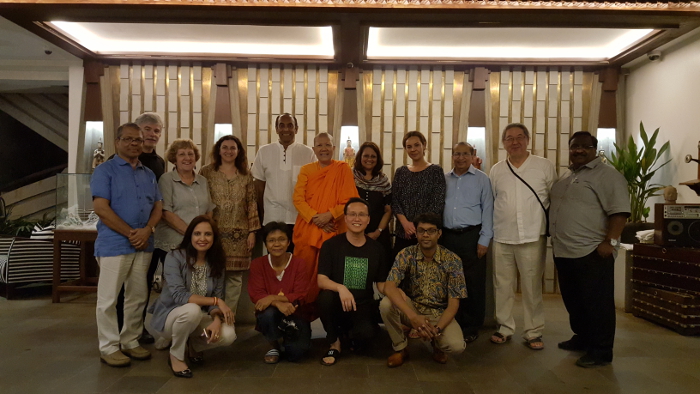 I must confess that I was just a bit apprehensive about attending the meeting. I know that many Palestinian theologians have used liberation theology as an attack on Israel.
Coming out of the Biblical tradition, I don’t believe that the poor or the underdog is always right. In fact, in Leviticus (19:15) says: “‘Do not pervert justice; do not show partiality to the poor or favoritism to the great, but judge your neighbor fairly.” So, the paper I presented problematized the concept of liberation theology and I believe I may have been a bit defensive at the beginning.
Quickly, I saw that it wasn’t necessary at all. Israel and the Palestinians were not on the agenda of the meeting. I was the only one who mentioned them at all! The key issues under discussion were poverty in Asia and gender equality. We are expected to re-write our papers for publication, in light of the feedback we received, and I will make mine much less defensive.

The consultation afforded me an opportunity to renew some old friendships and to make some new ones. We stayed in an outstanding hotel in which the management invests in the staff and treats them with dignity. They arranged for us to tour Angkor Wat and some of the other nearby temples.  And, each day, they provided me with Kosher food and wine, straight from the Chabad House in Phnom Penh.

On Friday of that week, I flew to the capital, devoting a few hours to a visit to the Cambodian Genocide Museum. I spent much of Shabbat in the Chabad House, being very impressed with the rabbi and with a growing community of 80+ “local” Jews, augmented by Israeli backpackers. The “locals” are all ex-pats, from Israel, US, Gibraltar, etc. who now live in Phnom Penh on a permanent basis. Actually, there are growing Jewish communities in different parts of Asia (outside of Israel, of course): Hong Kong, Thailand, and elsewhere. This may have implications for future dialogues and member organizations of the ICCJ.

I arrived home about a week before Rosh Hashanah, with lots to do to prepare. In the meantime, the representative of the Council for World Mission, who basically funded the meeting, has indicated that they would like to continue, but in a less academic and less theological direction. He wants to call it: “Interfaith Engagement for Liberation.”  Certainly a worthy cause, but one in which there are other Jews, far more qualified than I to talk about what Jews are actually doing for liberation. (Just as an example, a rabbi I know organizes Jews to go to Nepal and help the people rebuild their homes and schools after the devastating earthquake).