Hungary provided us with a beautiful historical setting and greeted us with great hospitality. Still, we must ask ourselves some tough questions when conducting interfaith dialogue in a society that stresses the supremacy of one religion and culture. Who is my neighbour in dialogue, and where is my neighbour?

We who engage in Jewish-Christian dialogue often use analogies such as fraternity when relating to our partners in dialogue. In recent years, we have seen the concept of “Synagoga and Ecclesia” reinvented, giving us a powerful image that summarizes what we intend to achieve through dialogue - we as Jews and Christians sit, side by side as siblings and as students, learning from each other and together. Dialogue is both the method and the goal.
When we engage in dialogue with Muslims, we use the same language and the same analogy. Abrahamic dialogue, as conducted by the ICCJ through the International Abrahamic Forum, is also a dialogue between members of the same family, albeit three siblings at the table instead of two.

Our 2018 conference in Budapest and Kecskemét was successful and meaningful in a number of ways. Countless times, I heard delegates speak about how strong a relationship there exists today between Jews and Christians. We discussed, among other things, how we can exhibit and teach about this bond, making our experiences available not only within our local and regional communities, but also to the public, to society. Jewish-Christian relations have truly matured, and we are embarking on a similar journey together with our Muslim brothers and sisters as well.

The success of our conference to me lies in the atmosphere in the rooms during workshops and plenary buzz groups. I loved seeing how moderators had to work hard in order to regain the attention of delegates engulfed in vivid discussions. The successful launch of a re-structured International Abrahamic Forum is another one of the highlights as I see it, as the new steering committee really accomplished their task in presenting their ambitions and the work of the IAF to the broader audience of conference participants. The Muslim IAF steering committee members Mohammad Hannan Hassan from Singapore and Morteza Rezazadeh from Iran attended their first ICCJ conference in 2018 and contributed profoundly with their knowledge, humility and good spirits. Hopefully, we’ll see a growth in dialogue initiatives in countries that up until today have no official ICCJ members, because there certainly is potential.

When discussing the legacy and results of our most recent conference, one must also mention the presence and number of locals. In Budapest, but above all in Kecskemét, we witnessed an impressive turn-up of Hungarians who “dipped their toes” in dialogue, and hopefully will remain in touch with us in the future as well. Above I mentioned the analogy of fraternity in terms of inter-religious dialogue, and there is a second analogy that I want to stress as I move into the second part of this report - the analogy of the neighbour.

According to the most recent census (2011), less than 6000 Muslims live in Hungary, a country with just under ten million inhabitants. Hungary came into the media spotlight during the recent refugee crisis, and has since voiced numerous times that they will not accept the quota of refugees enforced by the EU. There is a worrisome rhetorical climate, presenting both Jews and Muslims as unwanted elements in Hungarian society. Dr Klára Anwar spoke with pride and optimism on her role as a Muslim in Hungarian society during the plenary session entitled “How can I find God in the “Other”? Towards Responsible Religious Belonging”. Her stance is both admirable and encouraging, but somehow I later the same day found myself scanning the streets and tram stations in search of one of my neighbours in spirit - the European Muslim. And I didn’t find him or her. 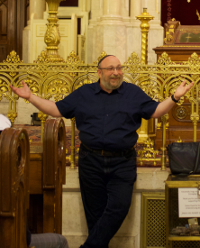 Hungary houses a fairly large Jewish population, sometimes estimated as large as 150.000. We encountered Jews going about their everyday life, and of course we saw the Great Dohány Synagogue and had the pleasure of meeting its Chief Rabbi Róbert Frölich, beaming with pride and optimism.
The tragic fate of Hungarian Jewry during the Shoah is part of Hungarian history, part of European history. Our young guide to the Dohány Synagogue presented us with a summary of the good, the bad and the ugly: Jewish life in Hungary is indeed vibrant, but the Donány Synagogue is a symbol of Hungarian Jewry’s wish to contribute and to blend in. My neighbour is there, but he or she is very aware of the rules and boundaries drawn by the majority society. And majority society in Hungary is putting more and more emphasis on the role of Christianity. Thus, to me the question remains: where is my neighbour?

During our Tuesday outings in Budapest, just before we all gathered at the Dohány Synagogue, I visited the Holocaust Museum. I was lucky enough to be in the company of the very knowledgeable Rabbi Jeffrey Cohen from Australia who had been to the museum before. He asked me about my impressions and feelings upon entering the museum and upon exiting. It turned out that we both had a sense of the museum being “clinical” or “antiseptic”; cold facts yet very few - in fact hardly any - artefacts.
Jeffrey Cohen and I continued our discussions, having left the museum and joined all other delegates at the Dohány Synagogue. Who is my neighbour? Is it someone who merely lives on my street, or is it someone whom I make room for within my own space? And where is my neighbour? These questions remain with me, and I have a feeling I will need to return to them in the future when engaging in inter-religious dialogue and participating in interfaith settings. Who is my neighbour, and where is my neighbour right now?