At the Opening Session of the 2017 ICCJ conference that was held at the Kammerspiele Bonn-Bad Godesberg, Germany some 350 delegates and guests enjoyed a program set on a theater stage.

Live music was beautifully woven into the program, and included traditional Jewish melodies as well as a modern interpretation of Beethoven. During the closing Festive Dinner on Wednesday evening July 5th, Prof. Dr Philip Cunningham made his last address as ICCJ President wrapping up the conference by referring back to the themes of the Opening Session.

The moderator of the opening event ICCJ's First Vice President Liliane Apotheker gave a heartfelt introduction to the evening, adding personal reflections on the powerful symbolism of her – the daughter of Holocaust survivors - introducing an interreligious conference close to the city where her mother was born. Furthermore, she extended gratitude on behalf of the ICCJ to the German institutions that by funding and support made this conference and many other ICCJ activities possible. The Lord Mayor of the city of Bonn, Ashok-Alexander Sridharan, then provided a short summary of the history and religious diversity of the city, and extended a warm welcome to the audience. Religion, said Lord Mayor Sridharan, is a source of both Community and Identity – a topic that other speakers would revisit during their addresses. 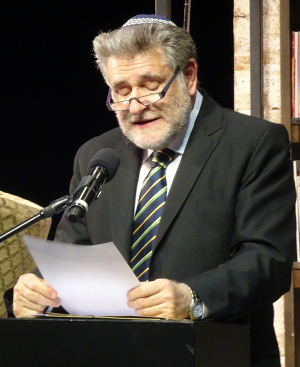 As an introduction to the evening’s keynote speaker Rabbi Dr Abraham Skorka, Vice President Apotheker reflected on a phrase from Yiddisch folklore: “Mein Gottele”, and invited Rabbi Skorka to elaborate on the subject. He drew inspiration from the writings of Martin Buber and rabbinical sources during his address, painting a vivid image of the relationship between Tradition and Change. These two concepts might seem opposite on a superficial level, but are in fact, as Rabbi Skorka worded it – “as multifaceted as life itself”. The Abrahamic religions are each in their own way built around the idea of a living, active God, and in the Jewish tradition, the Torah itself, or the law, is also an evolving matter. And while prayers may remain the same, the intentions change over time, adapted to the constant flow of new realities. There was something in the tone of Rabbi Skorka’s address that resembled scientific language, so it comes as no surprise that one of his identities is indeed that of a Chemist. In his finishing remarks, he touched on both the evolution taking place within a group and between groups, stating that “encountering the other stimulates us to improve ourselves from within”.

The keynote of Rabbi Skorka was followed by two passionate addresses made by Bishop Dr Munib Younan of Jerusalem and Cardinal Reinhard Marx. Both speakers drew on their respective personal experiences, and together with short historical notes this created a vivid backdrop for a discussion on the development of friendships and the welcoming of the Other. Bishop Younan described how the groundbreaking event that took place in Lund, Sweden last year has provided him with renewed energy. During this commemoration of the 500 year anniversary of the Reformation, Bishop Younan along with Pope Francis signed a Joint Statement, committing to a journey of friendship between Lutherans and Catholics. Bishop Younan voiced a hope that the interreligious dialogue of the future won’t be restricted by old patterns, and wished that the renewed energy he felt after the Joint Statement with Pope Francis would permeate the work of the ICCJ during the coming days. The message from the speakers was very clear – now more than ever, those who engage in interreligious dialogue must actively work on removing traces of hatred and contempt from their respective traditions. The image of the refugee as the Other has been reinforced during the past couple of years, and Bishop Younan encouraged the audience to also see the face of God in the Refugee.
Short addresses were then made by Abraham Lehrer, Vice President of the Central Council of Jews in Germany and Reverend Manfred Rekowski, Praeses of the Protestant Church in the Rhineland.

ICCJ President Prof. Dr Philip Cunningham closed the opening session by delivering an inspired address on the topic of dialogue and friendship. Quoting Pope Francis words about a journey of friendship, President Cunningham added that friendship is hard work that requires an active commitment. He stated that we live in unprecedented times for dialogue, with endless possibilities of meeting the Other as a partner in dialogue. Quoting the threefold topic of this year’s conference – "Reforming, Rereading, and Renewing", President Cunningham added a fourth word: Reflecting, inviting the participants of the conference to reflect on their roles in dialogue and their part in the journey of friendship.

An excellent example of interreligious dialogue in an unlikely, international setting was provided by pianist Marcus Schinkel, who mentioned that he once took part in a spontaneous jamming session in Jordan, playing together with Bedouin musicians with whom he did not share a common spoken language. The music transcended ordinary conversation, and indeed directed those present in the right direction on the journey of friendship. In addition to Marcus Schinkel on piano, the audience had the pleasure of listening to the stunning vocals of Schirin Partowi, who sang in a number of languages including Hebrew and Arabic. 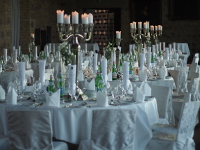 The Closing Festive Dinner was hosted at Godesburg Castle in Bonn, with a magnificent view of the sun setting over an opulent summer landscape. Conference participants and guests enjoyed refreshments accompanied by live music before dinner was served, and it was evident at every table that the conference had provided plenty of food for thought and that the conversations would continue into the night. Many participants expressed how pleased they were with the depth of the theological content of the conference, and stated that they will bring home new tools for engaging in interreligious dialogue locally and regionally. This relates back to what Bishop Younan talked about in his opening address on Sunday – finding energy by engaging in international dialogue, and bringing back that toolbox and sense of purpose to your local community.

In his closing address, which is published on the ICCJ Website, President Cunningham spoke of the “soils” in which dialogue grows and prospers. These metaphorical soils may look different depending on their location, there will always be weeds and obstacles - but nevertheless these soils are tended and nourished by all those who engage in interreligious dialogue, be it in a secular or religious setting, grass-root or academic. The journey of friendship follows a path that we have to trace and tread together, not just once, but continuously. The ICCJ, stated President Cunningham, is dedicated to the sustenance of Jewish-Christian dialogue, despite challenges and despite the indifference sometimes expressed within our own communities. In Bonn Jews, Christians and Muslims studied together, in the spirit of Pirkei Avot quoted by President Cunningham: “Find yourself a teacher, get yourself a friend”.