The ICCJ Executive Board met last week in Santiago de Chile for its January board meeting and a two-day consultation with delegates from all over Latin America.

Sunday through to Tuesday of last week was dedicated to internal meetings of the ICCJ Executive Board and its committees –  among other topics in preparation for our 2017 Conference in Bonn, Germany. 2017 is a significant year in several ways – the Protestant churches are commemorating the 500 year anniversary of the Reformation, and it is also the 70th anniversary of the Seelisberg conference. In addition to this, 2017 is an election year for the ICCJ, and as customary, board elections will take place at the Annual General Meeting in Bonn on July 6th.

We have enjoyed a warm welcome in Chile thanks to ICCJ Executive Board member Rabbi Shmuel Szteinhendler who lives with his family in Santiago de Chile and serves as the Rabbi of the Beit Emunah Masorti Synagogue. On Shabbat we were hosted by the congregation, a memorable experience and an inspiring start of a week dedicated to various aspects of interreligious dialogue. 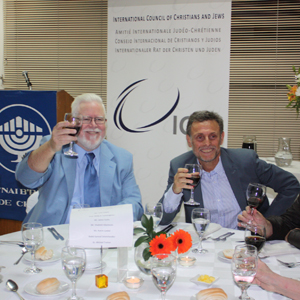 For the board meeting we had the privilege of being hosted by the B’nai B’rith International in Chile, and on Tuesday evening we were invited to a marvelous dinner in the B’nai B’rith building that opens the this year's consultation on the theme of ”Religions and the Challenges of Violence”. The Chilean B’nai B’rith President Jaime Fuchs and ICCJ President Philip A. Cunningham welcomed the delegates from our Latin American member organizations and many representatives from local organizations and institutions who joined us at that evening, among them, for example, the Ambassador of Germany to Chile Rolf Schulze, the Ambassador of Israel to Chile Eldad Hayet, the Head of the Chilean Office of Religious Affairs Prof. Humberto Lagos, the Executive Director of the Chilean Jewish Community Mr Yonathan Nowodgrovsky, and the Director of the Chilean Branch of the Konrad Adenauer Foundation Katrin Löbel who was our host of a wonderful reception in the garden of a Lutheran Church in Santiago on Wednesday evening. On Wednesday and Thursday our venue was the Universidad de los Andes, as we engaged in our consultation.

The Executive Board of the ICCJ is delighted that no less than 14 delegates from our Member Organizations have joined us for the consultation. The delegates came from Chile, Uruguay, Argentina, Brazil, Peru, Spain and Cuba. In addition to the ICCJ Executive Board, officials and delegates, we had the pleasure to welcome a number of local guests, making the total number of participants nearly 50 – an unprecedented and encouraging number. The consultation featured the following experts as guest speakers: Prof. Pablo Ortuzar (Professor of Anthropology at the Institute for Sociology of the Catholic University of Chile), Dr Manfred Svensson (PhD in Philosophy, member of the Faculty of Philosophy of the Universidad de los Andes), Prof. Samuel Fernandez (Professor of Theology at the Pontifical Catholic University of Chile) and Prof. Joaquín García-Huidobro (Director of the Institut of Philosophy at the Universidad de los Andes).

Since our first-ever conference in Latin America, 2001 in Montevideo Uruguay, and many years later a second one 2014 in Buenos Aires, Argentina, the ICCJ have deepened its friendship and cooperation with its Latin American members – a development of significant importance and one that without doubt will be of benefit for many years to come. We are happy and honored to have been in Chile, and grateful for the people and institutions that have made this possible.

Further details and articles on ICCJ's consultation in Santiago de Chile and the gathering with its Latin American member organizations will follow soon!