This week Sir Sigmund Sternberg, patron of the International Council of Christians and Jews and (co-) founder of the Three Faiths Forum, one of the ICCJ’s members in the United Kingdom, passed away at the age of 95.

Numerous obituaries published this week have described the many activities in which Sir Sigmund participated and the leadership positions he held in the Jewish community in Great Britain and worldwide. His contributions to the field of interreligious relations and philanthropy have been deservedly praised. Here I would like to share some personal memories of the many contacts with "Sigi", as his friends knew him.

Sigmund Sternberg was born in Budapest and barely escaped the abomination of the Shoah by emigrating to London in 1939. There he became a successful businessman. But alerted by the experiences of his younger years in Hungary, he started to use the fortune he amassed in business to improve the relations between Jews and Christians. In the late 1970s he became involved with the International Council of Christians and Jews, most probably through the good services of his faithful interfaith companion, Ruth Weyl of blessed memory, who was fully involved in the work of the ICCJ.

In 1979 Sigi became Chairman of the Executive Committee of the ICCJ and his beneficence was instrumental in giving the organization fiscal stability. On the other hand, his leadership role in the ICCJ sometimes assisted him in his diplomatic and political activities on behalf of the Jewish community.

After a major restructuring of the ICCJ in 1998, Sigi became the ICCJ’s official patron. From then on he financially supported many of the ICCJ’s projects and initiatives, thereby enabling them to succeed in the work of Christian-Jewish understanding to which he was so intensely dedicated.

At the Annual Meeting in 1998 when he was appointed Patron, it was also decided to admit the London-based Three Faiths Forum as an ICCJ member which was founded in 1997 by Sir Sigmund, the Anglican Dr Marcus Braybrooke and the Muslim Dr Zaki Badawi.
The visionary Sir Sigmund had strongly insisted on opening the horizon of Jewish-Christian Dialogue to trilateral encounters and was significantly involved when the ICCJ decided to establish its trilateral branch, the International Abrahamic Forum. It was Sigi's conviction that both encounters – Jewish-Christian relations and Jewish-Christian-Muslim relations – deserve the same relevance in our societies nowadays. 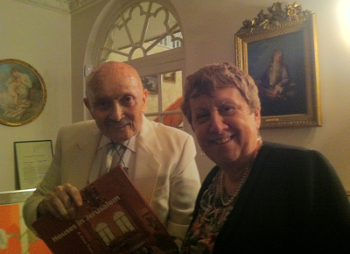 During the London meeting of the ICCJ Executive Board, early in the spring of 2013, we visited Sigi at his home. His beloved Lady Hazel, who would predecease him in 2014, also was present. The then ICCJ President Dr Debbie Weissman (see picture: Sir Sigi and Debbie Weissman) gave him on behalf of all of us a gift as a token of our gratitude for his lifelong commitment to interreligious dialogue.

I think of Sigi often when I see on my bookshelf Emma Klein’s biography, The Knight with Many Hats. On the title page it reads: "With gratitude for your friendship and support." - Sir Sigmund Sternberg.

May his name be for a blessing. May the perpetual light shine upon him.

Picture on teaser column on the frontpage:
Sir Sigmund Sternberg speaking at ICCJ's 2006 Annual Conference in Vienna; in the background Dr John Pawlikowski, ICCJ Honorary President and in 2006 ICCJ President.