ICCJ's Former President and Honorary President Rabbi David Rosen attended the 30th International Meeting for Peace "Thirst for Peace: Religions and Cultures in Dialogue" in Assisi and gave a speech on the universal significance of Jewish-Christian dialogue 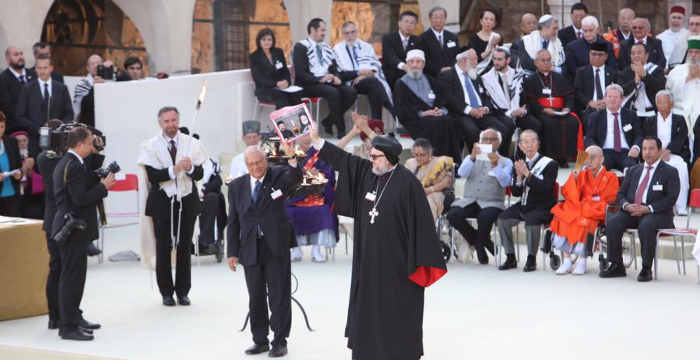 The Jewish-Christian Dialogue – its Universal Significance
by Rabbi David Rosen

There is nothing comparable to the transformation of the Jewish-Christian relationship “in our times”. A people presented by the Church in the past as condemned, rejected by God, in league with the devil, is today viewed in the words of Saint John Paul II as the “dearly beloved elder brother of the Church of the Eternal Covenant” with whom the Church has a unique “intrinsic” relationship.

This revolution was of course substantially galvanized by the Shoah, the Holocaust.
Of course the Shoah was a pagan enterprise, as Emeritus Pope Benedict XVI has described it.
However, it could not have succeeded to the degree it did with the extermination of six million Jews, if the land had not been tilled, over centuries, with what was called "the teaching of contempt" towards the Jews. This had been the predominant attitude within the Christian world that viewed the Jews as rejected and cursed by God and condemned to wander until “the end of time”. As the 1998 Vatican document “ We remember” acknowledged, this approach contributed significantly to the dehumanisation of the Jew that facilitated the enormity of the tragedy of the Shoah.

However in the context of that tragedy remarkable individuals stood out as beacons of light. Angelo Roncalli was one of those most outstanding, saintly people who , when he was the Papal Legate in Turkey, was not only one of the first outsiders to know of the Nazi extermination machine, but also saved thousands of Jews from the clutches of death. When he became Pope John XXIII and convened the Second Vatican Ecumenical Council, he desired to rectify these terrible distortions of the way the Jewish People was perceived by the Christian world.
His famous meeting with the great French Jewish historian Jules Isaac confirmed that determination. He gave the task to Cardinal Augustin Bea, but they faced opposition not only from arch conservative bishops who believed that the Jews really were condemned and did not want to let them "off the hook"; but also from the bishops within the Arab Muslim world who were fearful that a positive statement in relations to the Jewish people might be seen as a political statement on the situation in the Middle East.
It was also opposed by many from Far East lands where Jews did not even feature on the radar screen, many of whom failed to understand why the Church should be so preoccupied with the Jews; and for whom the relationship with Hinduism and Buddhism was far more important.

As has been widely noted, the big change embodied in section 4 of Nostra Aeatate is precisely the overall positive approach towards the Jews. In emphasising that it is wrong to see the Jews as condemned and as rejected and that the covenantal relationship between God and the Jewish People must be seen in a positive light, all other affirmations had to be interpreted accordingly.
It meant viewing the Jews not just as a precursor to Christianity but as having a constructive and significant role in the Divine plan for humanity. That was not just a revolution, it was a Copernican revolution. It meant the Church revolutionizing its whole approach towards the Jewish people.

Pope John Paul II took this revolution to new heights both with his designation of Antisemitism as “a sin against God and man” and his “liturgy of repentance” which included the prayer asking forgiveness for sins committed against Jews down the ages – a text he placed at the Western Wall on his pilgrimage to the Holy Land in 2000. His aforementioned affirmation in the Rome synagogue in 1986 that the Jews are the “dearly beloved elder brother” of the Church was followed by Pope Benedict XVI’s reference to the Jewish People as the Church’s “fathers in faith” who, as he wrote to Chief Rabbi Di Segni, are uniquely beloved for the Church. Both he and subsequently Pope Francis have reiterated the incompatibility of authentic Christian faith with Antisemitism; and both of them followed in their predecessor’s footsteps, visiting the Great Synagogue in Rome and traveling on pilgrimage to Israel, to the Holy Land. 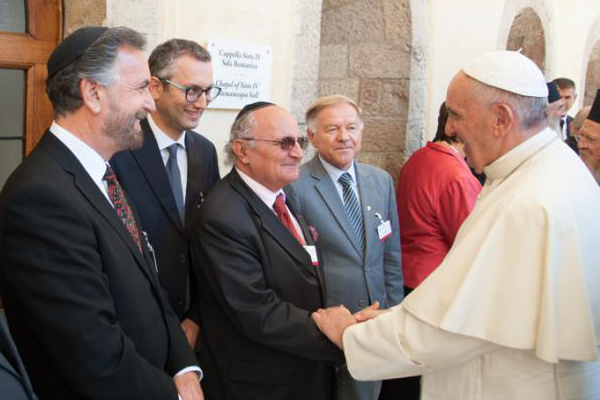 Indeed Pope Francis is known to the whole world as a true friend of the Jewish People. In his first Apostolic Exhortation, Evangelii Gaudium, he reaffirmed these teachings concerning the Jewish People stating that “the friendship which has grown between us makes us bitterly and sincerely regret the terrible persecutions which they have endured, and continue to endure, especially those that have involved Christians.”
Moreover Evangeli Gaudium declares that: “God continues to work among the people of the Old Covenant and to bring forth treasures of wisdom which flow from their encounter with his word. For this reason, the Church also is enriched when she receives the values of Judaism.”

As indicated, this transformation was facilitated by a more universal context and it enabled a more universal vision; and surely there is truly a universal message in the very transformation itself. For if such a relationship that was so chronic, so poisoned, so negative can be transformed into being one that is so positive and so constructive today, then there is no relationship that is beyond transformation, no matter how poisoned, how problematic, how vitiated it may be by politics. Everything is really possible. We can transform it all and we can turn our world into the kind of world that our religions teach it really should be.

Read also the article "'The Spirit of Assisi' as perceived by Jewish Leaders" by Lisa Palmieri-Billig (published in La Stampa, online, September 26, 2016)