On Thursday 3rd December 100 Muslims, Christians and Jews gathered at Manchester Jewish Museum for the International Abrahamic Forum’s “Challenging Antisemitism and Islamophobia” event. After months of planning, the event was held in partnership with the UK Council of Christians and Jews, their local Manchester branch, the Three Faiths Forum and the Muslim Jewish Forum of Greater Manchester. 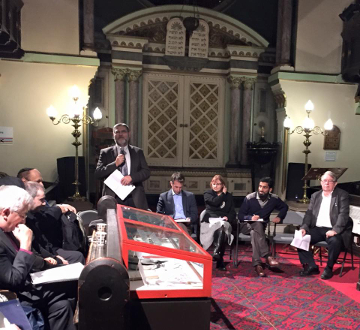 Rabbi Ehud Bandel, IAF co-chair, welcomed the speakers and guests to this timely event, held weeks after the Paris attacks and the day after Britain voted to back airstrikes in Syria. Ehud thanked IAF coordinator Francesca Frazer for organising the event and CCJ, local and national, for its assistance. The evening comprised two panels, the first exploring the academic roots of antisemitism and Islamophobia, the second devoted to interfaith practitioners who gave us insights into their own experiences and positive stories within their own communities, a force for good in such difficult times.

The first panel of academics was chaired by Dr Jane Clements, Director of the Council of Christians and Jews who also previously set up the Forum for Discussion of Israel and Palestine (FODIP). The panel began with a fascinating historical overview of Jewish-Christian-Muslim relations by renowned scholar Prof Philip Alexander, current President of the Jewish Historical Society of England. This was followed by Dr Mustafa Baig, IAF co-chair and lecturer at Cardiff University’s Centre for the Study of Islam in the UK, who discussed the history of Muslim-Jewish relations and more current developments surrounding Islamophobia. The panel concluded with Dr Dave Rich, Deputy Director of Communications for the Community Security Trust, who spoke about the increase in antisemitic attacks in the UK following the Israel-Gaza conflict in 2014 and the increase in anti-Muslim attacks following the Lee Rigby murder in 2013 and Charlie Hebdo attack in 2015. These external events led to spikes in aggression towards both communities, and he argued that both communities are hurting and should channel this pain into working together to overcome such divisions. 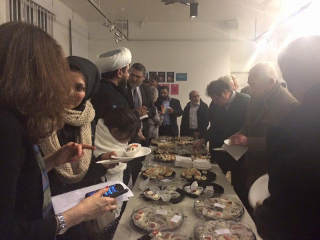 The audience was enthralled and asked many questions about the involvement of the media in fostering divisions within communities. As ever the most fruitful discussions took place in the interval, where communities who had never previously interacted came together over a mouth-watering buffet. Jews, Christians and Muslims, rabbis, bishops and imams, interfaith practitioners and academics, people from every corner of the country joined together and explored ways to work together to combat prejudice against all our communities. 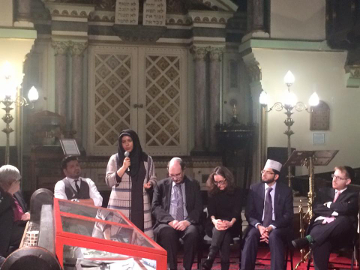 The second panel of interfaith practitioners was chaired by the esteemed Rt Rev Dr Michael Ipgrave, Bishop of Woolwich, who gave us his unique perspective on being Bishop of the community where Lee Rigby was murdered in 2013 and he discussed the impact of this event on the whole community, including the local mosque who experienced much antagonism in the weeks which followed. Pasha Shah then spoke about his former role as Chair of FODIP and his current role advising the  government on faith issues, while Rabbi Benjy Rickman, an experienced educator at a Jewish secondary school in Manchester and a religious broadcaster, then told us of his ground-breaking work twinning Jewish and Muslim schools. In his words, “When we learn to listen and are brave enough to reach outside our own community we can make a world worth living in.”
Qari Muhammad Asim, MBE, senior Imam at Makkah Masjid (mosque) and senior editor of www.imamsonline.com, a platform developed to promote mainstream Islamic voices and combat online radicalization, spoke about his own interfaith work with young people, affirming the importance of seeing everybody as part of humanity. “We must join hands and heads to eliminate prejudice, bigotry and intolerance from our society – whether it be anti-Semitism, anti-Muslim hatred or hatred towards other minority communities.” We then heard from Elizabeth Harris-Sawczenko, Deputy Director of the Council of Christians and Jews, who discussed the influence the media has on the general public and mentioned some of the shocking Islamophobic posts she had seen on social media. While she was able, after much discussion, to change the perspective of one journalist, she recognized the difficulties in changing the mindsets of those already heavily influenced by media representations of Islam.
Yasmeen Akhtar from Three Faiths Forum (3FF) began with a moment of silent reflection before discussing the impact of social media on public perceptions and said she felt that Muslims were not on an equal playing field yet in dialogue. The audience was clearly moved by these thought-provoking words.  The panel concluded with David Arnold MBE, Holocaust educator and Co-Chair of Manchester CCJ, who spoke about the positive stories of interfaith relations which are rarely broadcast in the media, such as the Muslim who hid Jews during the attack on the kosher supermarket in Paris, but also warned of the dangers of lessons not being learned from the atrocities of the past.

In the final question and answer session, one imam commented that he had never been involved with interfaith work before but after tonight he was going to do much more. In the words of Bishop Michael Iprave, ‘Antisemitism and Islamophobia are problems for us all, as is the persecution of Christians across the world. We can only tackle these challenges by standing together in mutual trust, respect and partnership.” Francesca Frazer concluded the event with a vote of thanks to those who assisted in organizing the event and she expressed her hope that the best practice shared tonight and the new friendships formed between the communities would continue to flourish. As a result of this event we have received countless messages of thanks and people wanting to network with others to continue the work in their own communities. A small selection of the positive comments which followed are replicated below:

“Thank you so much for all your work in organising and preparing for last night. I thought that it was a remarkably positive occasion, with a good range of people present, some very stimulating contributions, and above all a markedly positive atmosphere which was all the more striking because it was engaging with real issues rather than going for superficial generalities. I think that you must feel very pleased with the result, and I am grateful to you for making me part of it.”

“It really was splendid and will for me lead to some useful new networking.”

“What an excellent night. Quality speakers and very well organized.”

“A memorable venue with excellent speakers.”

“The event at MJM was the best interfaith event I have ever attended. The historians were excellent and people spoke frankly.”

“It was an honour to be part of this historic event.”