Impressions from the Conference Opening Session, June 28, 2015
by Murray Watson

The first day of the 2015 ICCJ Conference in Rome was a remarkable blend of hospitality, gratitude and celebration.
Dr Debbie Weissman, the Immediate Past President of the ICCJ, chaired the conference’s opening session, which was held at the Pontifical University “Urbaniana”. The university’s rector, Father Alberto Trevisiol, offered warm greetings to all of the conference participants, and was followed by words of welcome from ICCJ President Dr Philip A. Cunningham, and Marco Cassuto Morselli (President of the Amicizia ebraico-cristiana of Rome), on behalf of the local organizing team. 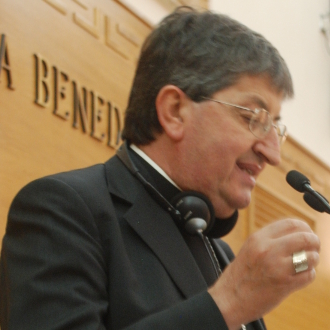 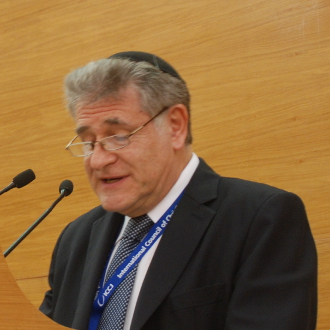 Two very distinguished speakers, Florence’s Cardinal-Archbishop Giuseppe Betori (left picture), and Rabbi Abraham Skorka, Rector of the Seminario Rabinico Latinoamericano in Buenos Aires (right picture), inaugurated the conference with very thoughtful reflections on the history of Jewish-Christian dialogue over the past half-century, and some of the challenges which still remain. Both keynote speakers stressed the great progress that has been made, the many areas of commonality that have been discovered, and the potential for Jews and Christians to collaborate in important and creative new initiatives in the future. Many people around the world have come to know Rabbi Skorka as “the Pope’s rabbi” (he is a close friend of Pope Francis), and Cardinal Betori’s city of Florence was the first city in Italy to formally establish an Amicizia ebraico-cristiana, more than sixty years ago). Their presence symbolized beautifully the roots of Jewish-Christian dialogue, and some of its current expressions.

Following these opening speeches, the conference attendees were privileged to participate in the world premiere of the Sinfonia del Concilio [Symphony of the Council], a wonderful new musical piece (composed by Don Federico Corrubolo) that captured masterfully the ups and downs of the Second Vatican Council through music and readings, performed by the Sylvestro Ganassi Youth Orchestra. Following the Symphony, the conference participants were treated to a selection of liturgical music from the repertoire of Rome’s Jewish community, sung for us by Cantors Maurizio Di Veroli and Giuseppe Mallel, as the group mingled over light refreshments on the university grounds.

With more than 260 conference participants from around the world, the 2015 ICCJ conference drew a large crowd to celebrate the fiftieth anniversary of Vatican II’s declaration “Nostra Aetate,” and to mark the major accomplishments of contemporary dialogue between Jews and Christians, which would be addressed in the coming days.